Dirty tactics such as eye gouging often come up in self defense instruction as a legitimate method of escaping an attacker. Specifically when on the ground.

But as a stand alone tactic, they are very unreliable.

Recently a woman was attacked in Cincinnati. She was on the ground with her attacker on top of her and she gouged his eyes.

There was certainly an effect.

It pissed the attacker off.

He went from wrestling with her to punching her in the head repeatedly. The punches fractured her nose, gave her black eyes, and plenty of swelling in her face. Not to mention the emotional trauma.

She survived largely due to the kindness of strangers hearing her and intervening.

The woman in this story is a friend of a friend on Facebook. I was tagged in a post asking for my opinion on what else she could have done, so I got to read about the attack in the victim’s own words. The new story linked above isn’t as detailed, but I will not link to her post out of respect for her privacy.

To be clear, I’m not bashing the victim. She did exactly what she needed to do to survive. She saw the man, got a bad feeling, trusted her intuition, made a plan to move to where she knew other people were, and never gave up fighting back against her attacker. Excellent work! I’m specifically referring to the concept of eye gouging as a self defense tactic.

Then there was recently a case in which an armed intruder broke into man’s home in order to rob the place.

The intruder was distracted for a second and the homeowner made his move.

In the midst of the fight the homeowner, who had military experience, released the magazine out of the bad guy’s rifle. And the round that was in the chamber went off.

Then the fight went to the ground.

The homeowner reported that he “sat on him and gouged his eyes.”

So, does that mean that eye gouging works? 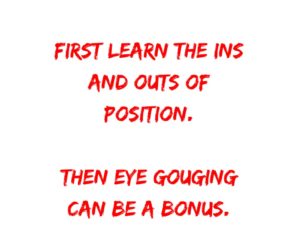 Position Is The Best Indicator Of Success

The essential thing to understand is the positional relationship of the opponents in both of these fights. Position is what determined who was winning the fight and who was losing.

In both cases, the person on top was winning regardless of whether eye gouging was used or not.

In the woman’s case, she was in an inferior position. Her position did not support her tactic. The priority here should be to improve position.

In the homeowner’s case, his superior position was winning the fight. He probably didn’t need to eye gouge the attacker, but his position supported his tactic.

In Brazilian Jiu-Jitsu and other arts that specialize in groundfighting, they have a maxim; position before submission.  In the Bujinkan martial arts, this is one aspect of kurai dori (to take a position).

I like to think of it as position before technique. Or strategy before tactic. It applies to standing range, clinch range, even large scale warfare.

First learn the ins and outs of position for reliable results. Then…dirty tactics can be a bonus.

Let us know your thoughts in the comments.